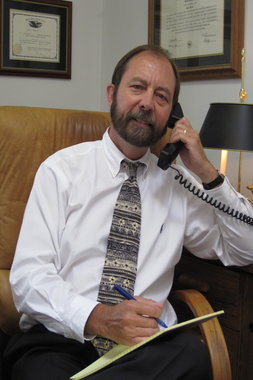 Rick West is not your typical Dayton Bankruptcy Attorney. He knows what it’s like to be in debt, hounded by his creditors and sued for bills he could not pay. Although he always helped consumers with difficult debt problems since he started practice in 1986, he had a horrible accident in 1993 and broke his back after falling off of his rooftop. He could not work for months, and had to close his law practice while, literally, he “got back on his feet.”

As a result, he had to live on credit cards, pay his mortgage and feed his family with borrowed money. He was unable to pay his bills and – eventually – got sued by attorneys he knew.  They would not work with him.  They did not care about him, or his family. They wanted money he could not pay.  It was devastating.

In time, Rick did get back on his feet, and was able to pay the creditors.  But the experience changed him forever and he vowed to devote the rest of his professional life to helping good, hard-working people who, through no fault of theirs, could not pay their bills.  He decided then to become the best Dayton Bankruptcy Attorney in town. And he has!

He closed his general practice, and began to specialize in debt relief.  He became one of only a handful of attorneys in Ohio who are board certified in consumer bankruptcy, and he is also a certified consumer credit counselor as well as an accredited debt arbitrator and debt workout specialist, certified by the IAPDA.  He is the only attorney in Ohio to hold all of these certifications. He has lectured widely to attorneys across Ohio on bankruptcy law, and has appeared on numerous television programs as a bankruptcy specialist. He is a Dayton Bankruptcy Attorney in a class by himself.

Rick understands the importance of credit.  His firm is the only firm in Ohio to offer – to all clients – a unique 3-Step Plan for total financial recovery.  He combines his expertise as a consumer credit counselor with his extensive bankruptcy experience to help his clients get out of debt, rebuild their credit, and – after the bankruptcy is over – Rick’s firm continues to help his clients to ensure that their credit report is accurate.

Because he is also licensed to practice before the United States Tax Court, Rick can also help with consumer tax debt problems, including the “pennies on the dollar” offer-in-compromise program. He is the only Dayton Bankruptcy attorney who combines all these services in one office.

Since 1986, over 20,000 Miami Valley consumers have trusted Rick to turn their finances around and help them get  a true “fresh start” – including restored credit.